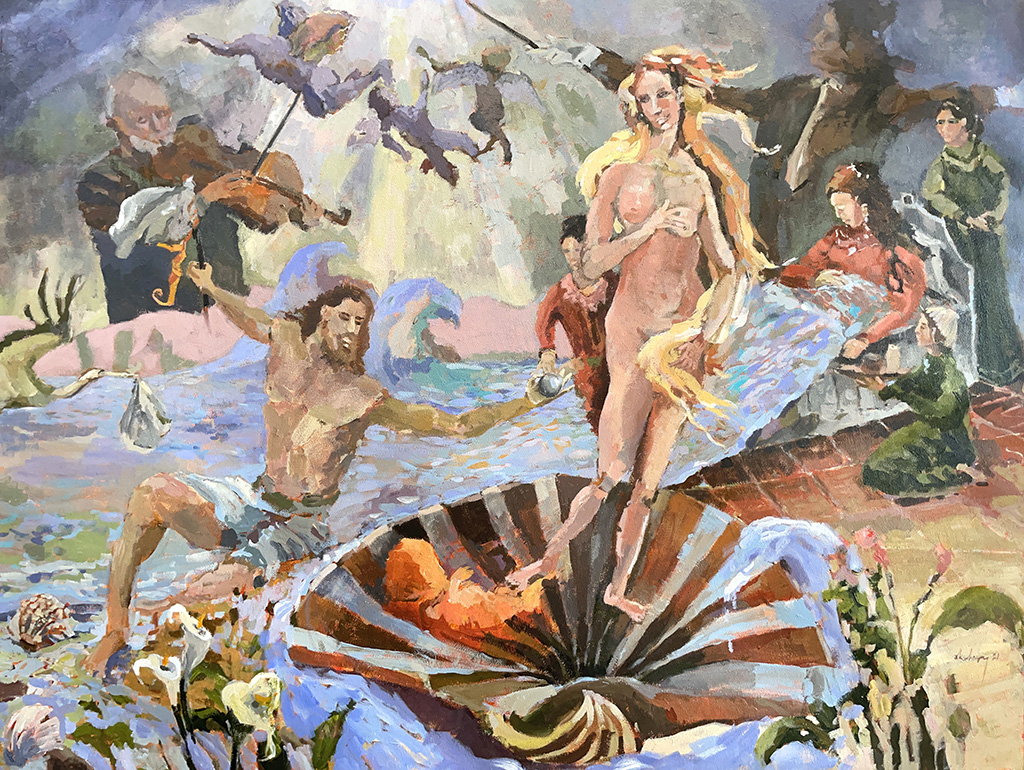 For this artwork, the artist thought of depicting the celebration of the birth. Keeping in mind a girl figure as the centre of the composition,

Drawing inspiration from Botticelli's - Birth of Venus, an iconic 15th century painting, the artist took a novel perspective comparing the manner in which Venus was born to the efficacy of India superstitions and myths diminishing over time.

In the painting is the obvious female figure in the foreground standing on the scallop that was washed ashore by the sea. The delighted mother is resting on the bed surrounded by other handmaidens who are taking care of her. Her quilt is shown to be an extension of the ocean. The father is ecstatic with the arrival of his firstborn girl child and is shown celebrating with a grateful and victorious gesture. He holds a flag with a seahorse as a vigil. Seahorses are the only species in which the male bears the young. The other elements added to the merrymaking are the musical conductor and the violinist in the background, the cherubs flying in the sky and basking in the sun and the stork, a part of a folklore where it carries the white cloth bag marking the birth of a baby. I chose to add lilies in the foreground, owing to their graceful curved petals that slightly hint the feminine form.

Akshay is a self-taught artist primarily working in acrylics and oils. He is currently working on figurative paintings in an impressionist style.

See from other artists

Vanishing Girls is a campaign initiated by ADF India to raise awareness against the practise of sex-selective abortions and to advocate for effective implementation of the Pre-Conception Pre-Natal Diagnostic Techniques (Prohibition of Sex Selection) Act, 1994.
Copyright ©  Vanishing Girls Campaign - ADF India